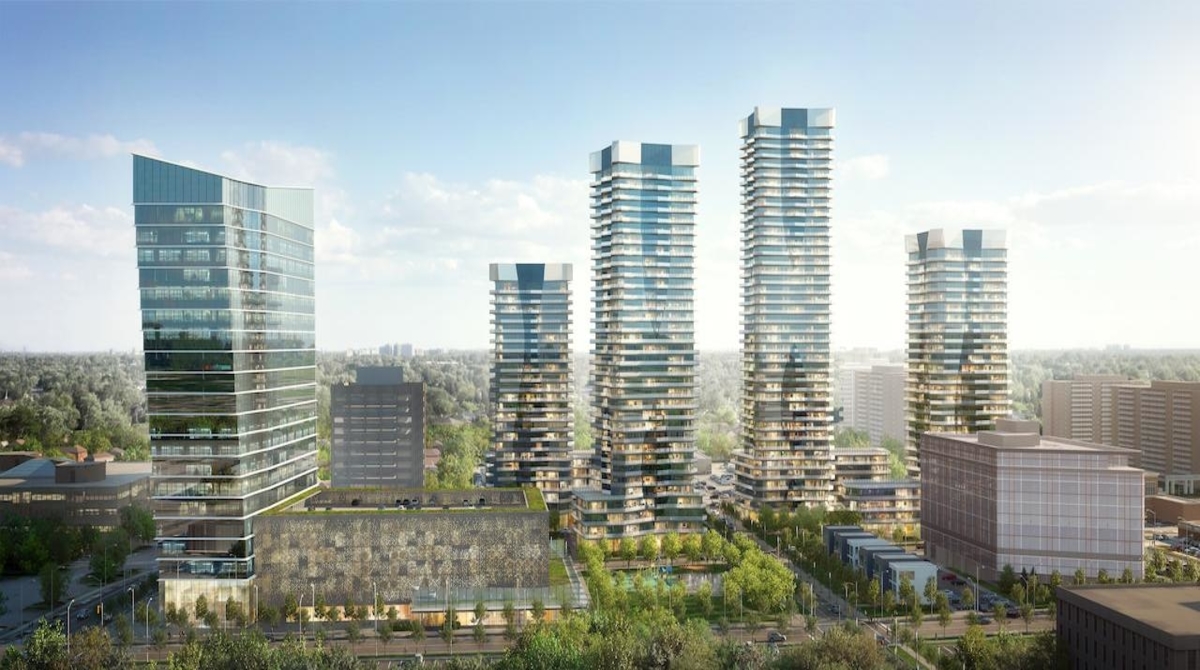 A proposal from property owner ELAD Canada was submitted to the City of Toronto seeking rezoning and an official plan amendment for the construction of a major multi-tower redevelopment of Lansing Square. This is a large business park located at Victoria Park and Sheppard where North York meets Scarborough per Urban Toronto.

The Lansing Square Redevelopment from ELAD Canada would include the following:

- Four new condominium towers with heights up to 40 storeys

The project will contain 3,560 m2 of retail space, 59,228 m2 of office space, 11,586 m2 of residential space and was designed by WZMH Architects. The plan is divided into two parts by land use, with a new mixed-use community fronting onto Sheppard Avenue East and Victoria Park Avenue and an office employment area within the southwest quadrant of the property.

At the northeast quadrant of the site, Block 1 would house a pair of condominium towers known as Tower A and B. On the north side of the block, Tower A would rise from a 6 storey mixed-use podium fronting onto Sheppard Avenue East, rising 40 storeys and measuring 127.45 metres to the top of the mechanical penthouse. This tower would house 434 units.

To the east, Tower B will rise 27 storeys including a 4 storey mixed-use podium fronting onto Victoria Park. This tower will reach 88.99 metres to the top of the mechanical penthouse and house another 297 units.

To the west of Block 1, Block 2 would be divided from the previous buildings via a new north-south street carved through the site. Block 2 will retain an existing 12 storey office building located at 2 Lansing Square but will add 34 and 24 storey condominium towers and blocks of low-rise townhomes. Known as Tower C, the 24 storey element would feature a frontage along Sheppard Avenue, rising 80.14 metres and would include 246 units. To the south, the 34 storey Tower D would rise to a height of 109.65 metres to the top of the mechanical penthouse and contain 355 units.

At the site's southeast quadrant, Block 3 will retain an existing 8 storey office building located at 2550 Victoria Park Avenue and add two new blocks of townhouses to the west, fronting onto the new north-south public street.

At the southwest quadrant, Block 4 proposes a new 19 storey, 85.5 metre office building fronting onto Settlers Road, known as Tower E, as well as a 7 storey parking building serving the site. Wedged between Blocks 3 and 4, Block 5 at the south end of the site will have a new public park with a total area of 3,670 m2.

The total residential components will include the following:

- Townhome units would average in size at 148 m2

According to ELAD Canada, Lansing Square offers approximately 437,000 square feet of space, with accessibly located in the heart of North York. It is situated in the Consumers Road Business Park and is minutes from the Don Valley Parkway, Highways 401 and 404 and the Sheppard Subway line. The TTC bus service is right at its doorstep which makes it very convenient for employees to commute to work by car or public transit.

Lansing Square integrates into a vibrant live-work-play lifestyle. It is surrounded by many dining options, plus nearby essentials like fitness centres, banks, daycare and grocery stores. Lansing Square is currently home to tenants like Reliance, Statistics Canada, Dynacare, Stephenson Engineering and Manulife.