ASA Chicago, a local trade association representing subcontractors of all construction trades for over 50 years, looks to knock this year’s Meet the GCs event out of the park on Tuesday, October 5 at the Wintrust Field, also known as the Schaumburg Boomers stadium. 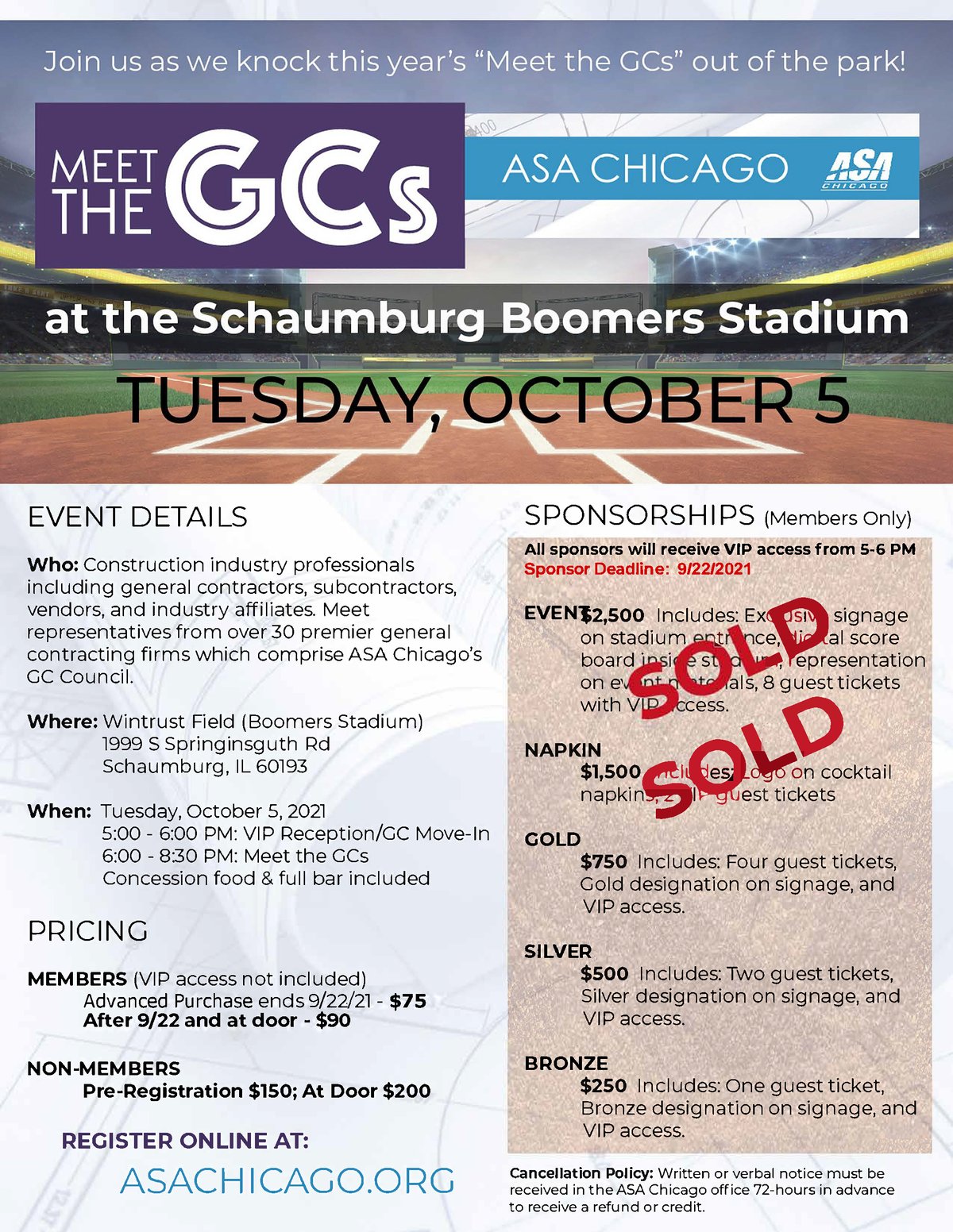 Though 2020’s virtual series yielded great results and quality time between members and GCs (along with several horrible [horribly funny] puns launched by ASA Chicago’s Executive Director, Marissa Veith who helped to moderate the series), members and industry peers are excited to gather in person once again for an evening of solid business networking, hot dogs, beverages, and non-digital facial recognition.

Ian Lamp, President of Lamp Incorporated and ASA Chicago General Contractor Council member since 2015 is looking forward to this year’s Meet the GCs and shares the following testimonial as Lamp nears its seventh year in participation:

“A successful project is the result of teamwork consisting of open and honest communication, integrity, grit, and having fun. Preparation for a successful team begins long before the project is envisioned. Participating in the annual Meet the GC’s night allows us the opportunity to connect with trade contractors who we’ve not done work with and to reconnect with those trade contractors we do work with. This event is a great way to put a face to a name and build long lasting relationships.”

Estimators, project managers, and Executives of the general contractors provide subcontractors with information about their companies and, most importantly, how to get on their bid lists. The event’s sponsors along with ASA Chicago’s Board of Directors and committee leaders are among those who will have first access to the GCs during the VIP hour preceding the event start time of 6:00 PM. Sponsors include RentalMax LLC, the Chicago Regional Council of Carpenters, and Cathodic Protection Management, Inc.

The General Contractor Council (GC Council) was launched in 1999 with the intention to improve communication and create a thriving partnership to benefit ASA Chicago members and the industry at large. Recognizing the importance of subcontractors, the mission of ASA Chicago’s GC Council is to facilitate communication, cooperation, understanding, and improved relationships between GCs and subs by providing access, education, and exchange of information based on common goals and interests. This annual affair is a key opportunity to facilitate this dynamic for ASA Chicago members and prospects looking to network, fill their pipelines and strengthen relationships.

While focused on featuring General Contractors, the event attracts commercial subcontractors of all trades, vendors, and professional service providers from the Chicagoland construction industry to form an excellent opportunity for quality business networking. If you do business in the Chicagoland construction market, this is a must-attend event where you will enjoy familiar faces and friendly ASA Chicago members who are extraordinary at connecting each other and assisting with introductions.

Interested parties can register at www.asachicago.org, with early bird rates for members expiring September 22. Construction professionals are encouraged to sponsor and attend to ensure they are visible and actively benefitting from this unique opportunity.