Albion at Renaissance Place to be Built in Highland Park 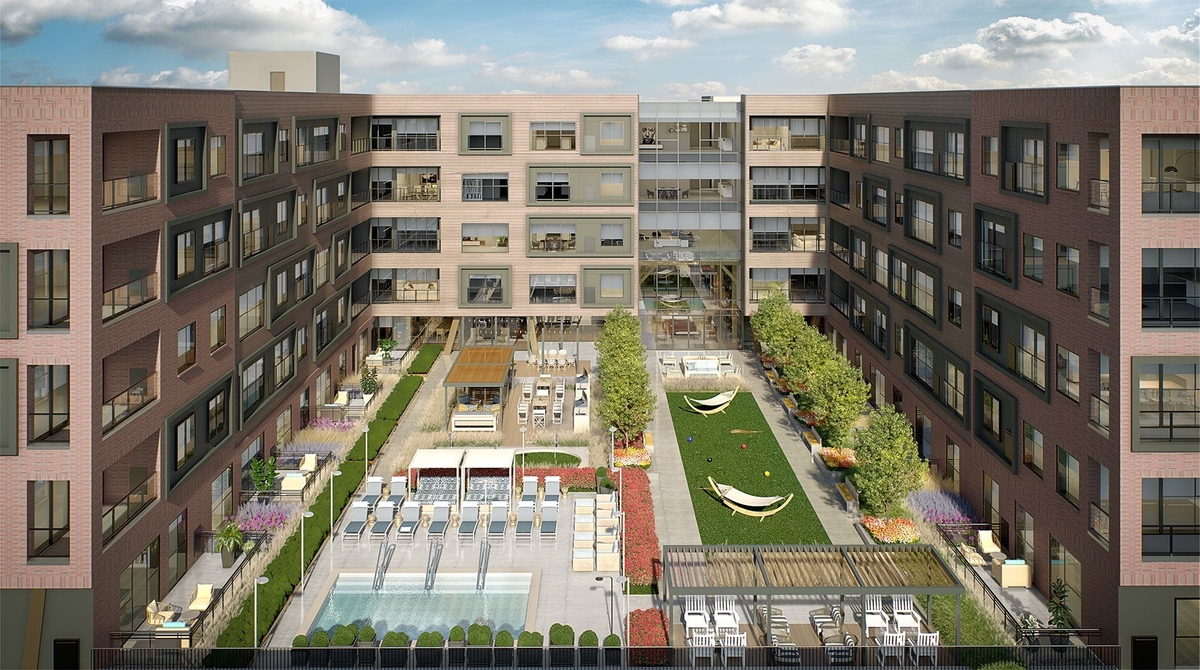 The Highland Park City Council members unanimously approved a preliminary development plan for the Albion at Renaissance Place. The rendering above is by Albion Jacobs and Hartshorne Plunkard Architecture. The proposal calls for demolishing the former Saks Fifth Avenue Store and replacing it with a five-story residential and commercial development. It will be an 89 unit apartment building with over 7,000 square feet of commercial space located at 1849 Green Bay Road.

An article in the Patch states that this project is a partnership between Albion Residential and the Jacobs Companies. This is the same team that also has another mixed-use development under construction across the street at 1850 Green Bay Road. The 161 unit Albion Highland Park was approved last year for the site of the former Karger Center and is expected to be open in the spring of 2021.

Zoning for the 48,000 square foot former Saks building is covered by a planned unit development that approved the neighboring Renaissance Place development in 1998. The store closed at the end of 2012 and has been vacant since then.

In June 2019, Albion Jacobs went under contract to buy the former Saks building. On March 31, the city entered into a memorandum of understanding with the developers to sell the air rights over its 29 space parking lot at 1920 Second St. for $1 million.

According to the preliminary development plan, the developers would replace 23 of those spaces at surface level, but seven of the public spots will have to be below ground due to support columns.

After two discussions in May, the Highland Park Plan and Design Commission voted to approve the design plan on June 2.

The redevelopment plan granted preliminary approval by the City Council this week and includes the following:

- A pedestrian pathway with lighting, landscaping and art between the new building and the main Renaissance Place structure.

- Connection to a planned pedestrian path that connects to Sunset Woods Park through the former Karger Center site.

The vice president of development for Albion Residential, Andrew Yule, stated that residents of the new buildings would also be able to use the common spaces and amenities from both buildings.

"The development team of Albion and Jacobs are thrilled to be part of the future of Highland Park and we hope we can encourage more businesses, restaurants and offices to invest in Highland Park as we are. It is truly a great community with deep rich roots and history and a council who cares about preserving that history and building for the future."

The two Albion projects will combine to offer 27 inclusionary units for households with incomes between 45 percent and 100 percent of area median income, with the average affordable unit available to those with below 70 percent of the median.

According to the Chicago Tribune, the City Council did question the developers on three aspects of the project:

- A lighted blade sign proposed for one corner of the building

As far as the air rights, a portion of the building is to be built over an existing city-owned surface parking lot. Supporting columns for the four stores of residential units to be built over the lot will take up about seven of the existing 29 spaces. The developers agreed to make seven of the underground parking spaces for public use to replace the surface spaces lost for structural supports.

The project incorporates 10 units designated for inclusionary housing. Those affordable apartments will include five one-bedroom units, four two-bedroom units and one three-bedroom unit.

The director of community development, Joel Fontane, suggested a lighting solution would be to minimize glare from the sign and this could be finalized later.

The project is estimated to generate about $500,000 in annual property tax. The developers expect to complete work on the final design and engineering plans for the development by late fall. It will then need to go before the city's Plan and Design Commission for review before returning to the City Council for final approval.

City officials have estimated the construction value of the project to be around $23 million.