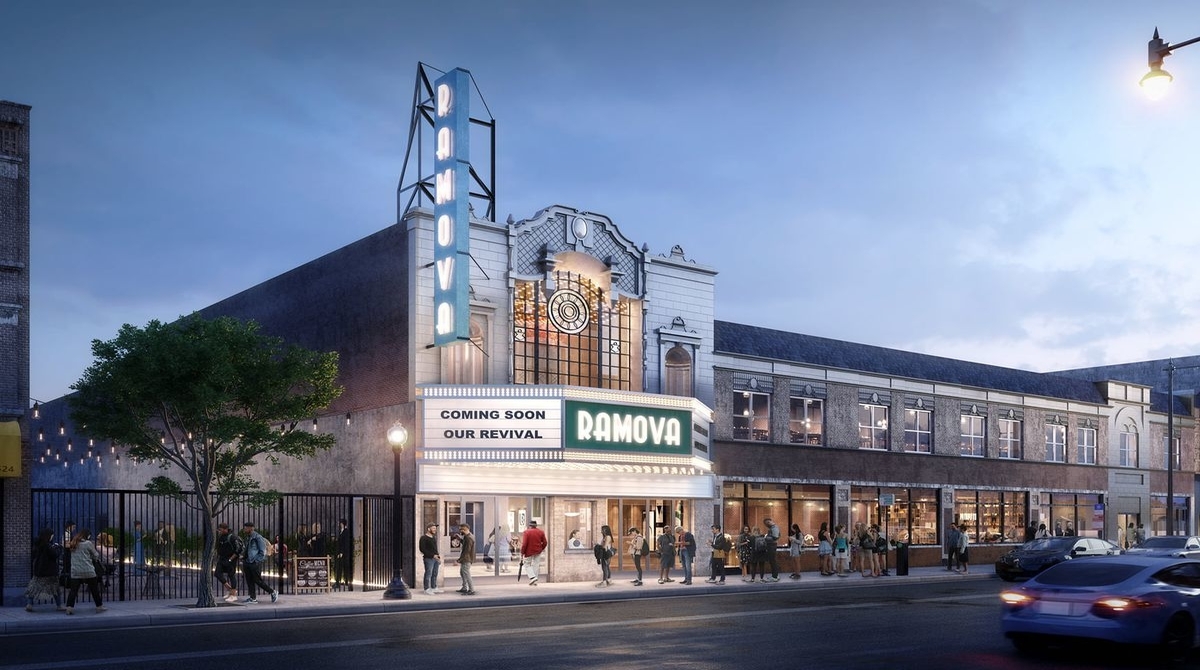 The City of Chicago bought the old theater in 2001 for $285,000. A few days ago, the city has decided to give the space to One Revival Chicago LLC, a developing company that is going to pump $23 million into restoring the theater. The theater has been vacant since the 1980's and renovation will involve another city-owned vacant lot next to the theater.

The renovation plans include the following:

Alderman Patrick Daley Thomson stated that the theater has been a liability for the city but could really become something that's positive. The spanish terracotta facade wrapping the auditorium could earn the theater a landmark designation but has suffered a great deal of damage over the decades and has cost the city almost $364,000 in repairs per The Real Deal.

The theater and adjacent vacant lot have been appraised at $570,000 and the deal includes a city tax increment financing subsidy of $6.64 million. The project, however, would end up creating 110 construction jobs and 80 permanent jobs.

According to the Chicago Eater, the Duck Inn chef and owner, Kevin Hickey, wants to revive the restaurant as part of the $23 million plan that would bring back the Bridgeport icon.

The Ramova Grill closed in 2012 after 82 years in operation at 3510 S. Halsted Street. The diner's signature dish was full of South Side lore. Hickey grew up eating the homemade greasy spoon's chili.

Co-owner, Tony Dinos, died in 2017 and no one has been able to duplicate the chili recipe which featured beef and came with or without beans. Hickey pointed out that one theory has been that the chili is just simply reheated Hormel. Whatever the case, generations of South Siders happily grew up eating this popular dish and Hickey wants to bring back the nostalgia.

Adding to Hickey's chili story is the fact that his recipe had won first place and had beaten out several of Chicago's best chefs at the Chicago Gourmet's competition that took place over the summer. The base for the recipe comes from his father who worked at another South Side institution, Lindy's Chili.

In the 50's, according to Hickey's son, Lindy's fired the elder Hickey after he asked for a nickel an hour raise. Frustrated by this, he took Lindy's chili recipe with him after his dismissal. Throughout all these years, the Hickeys have built upon this recipe.

The chili will play a large part in the revival of the Ramova Grill. One example will be the Duck Inn Dog which will be smothered in the chili to create a Detroit-style Coney dog.

The developers unveiled their plans at the community meeting a few days ago. There have been several attempts to revive this space throughout the years.

Per Block Club Chicago, in exchange for restoring the theater and a pledge from developer Tyler Nevius to maintain control of the venue for at least a decade, he and his partners plan to ask the city to sell them the theater and the adjacent lot for $1 and then seek $6.6 million in city funding via tax-increment financing. They also plan on buying the adjoining retail space to house the restaurant and brewery, and a nearby parking lot, from private owners.

The project still has a few hurdles to go. It needs several approvals and also needs to secure funding. The developers hope to break ground in early 2020 and estimate about 16 months of construction with an opening date in 2021. All three parts of the complex will open at the same time.