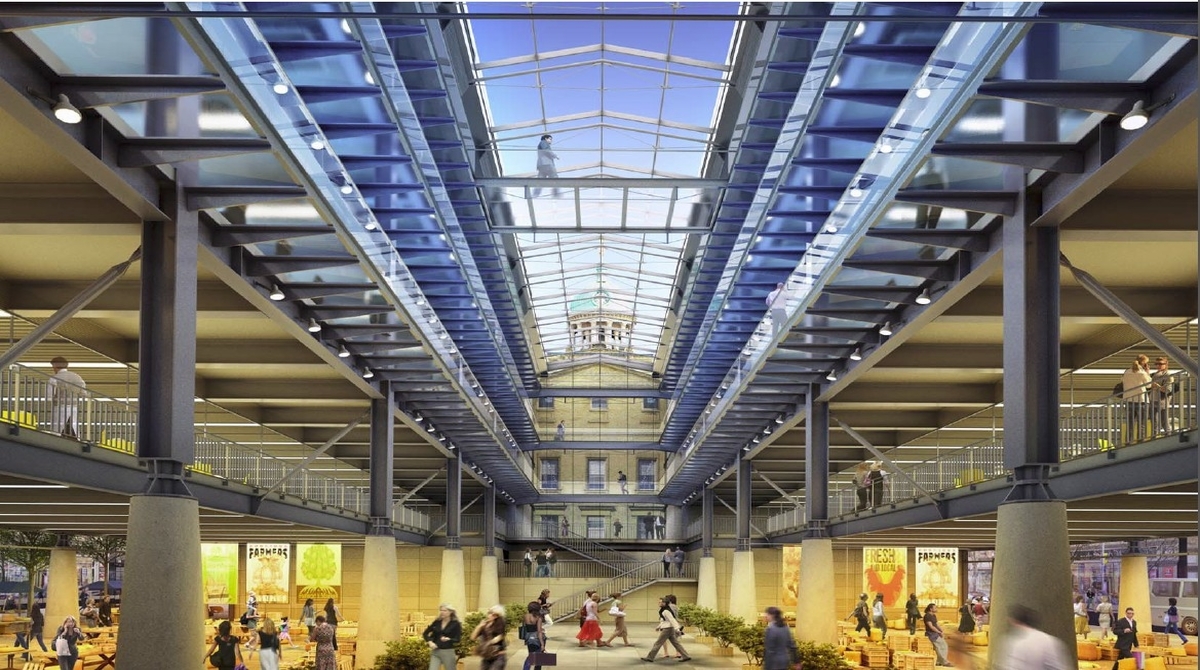 Toronto's St. Lawrence Market North Building is finally under construction and will bring an unbelievable showpiece to the northwest corner of Front and Jarvis Streets. The new building will include space for the replacement of the antique and farmers markets that were previously in the building and will also house the Toronto Court Services on the floors above which will relocate outmoded courts from different sites all over the city per Urban Toronto.

Work on this site has been active since 2015 when demolition work started. At that time, archaeological finds were made of previous market buildings built in 1831, 1851 and 1904 including sewer brickworks, foundations and cellars. When they did further exploration in 2016, they found more artifacts. They decided at that time to include some historical finds in the replacement building and this slowed the project to a crawl. Work even came to a complete stop when Bondfield, the first firm to win the construction bid, collapsed under bankruptcy.

The project was then re-tendered and a new contract valued at $116,302,000 was awarded to The Buttcon Limited/The Atlas Corporation Joint Venture. Site preparation is now in full swing.

Overgrowth and debris was cleared earlier this summer and just recently the site has been backfilled, creating a smooth surface on which the shoring work will start. Two rigs are now drilling boreholes around the site's perimeter and vertical support piles for the lagging is being worked on.

Once the drilling work is all done, excavation can begin to free up space for a four-level, 250 space underground garage. The foundations have to be formed and the underground levels completed before the building begins to rise above street level.

According to Toronto.ca, the completion date has yet to be announced but some have estimated it could be by the spring of 2022.

- Court rooms and administrative spaces on the upper floors

- Below grade parking for 250 cars

- The existing St. Lawrence Hall will be connected to the new North Building

The mechanical system will be comprised of innovative energy efficient strategies including chilled beams, radiant floor heating, under floor air distribution and enthalpy recovery on exhaust air streams. The mechanical systems will be organized to allow the central atrium to be clear of all mechanical services. A smoke control system will be included in the building design due to the interconnected atrium space, which is creatively integrated with the architecture.